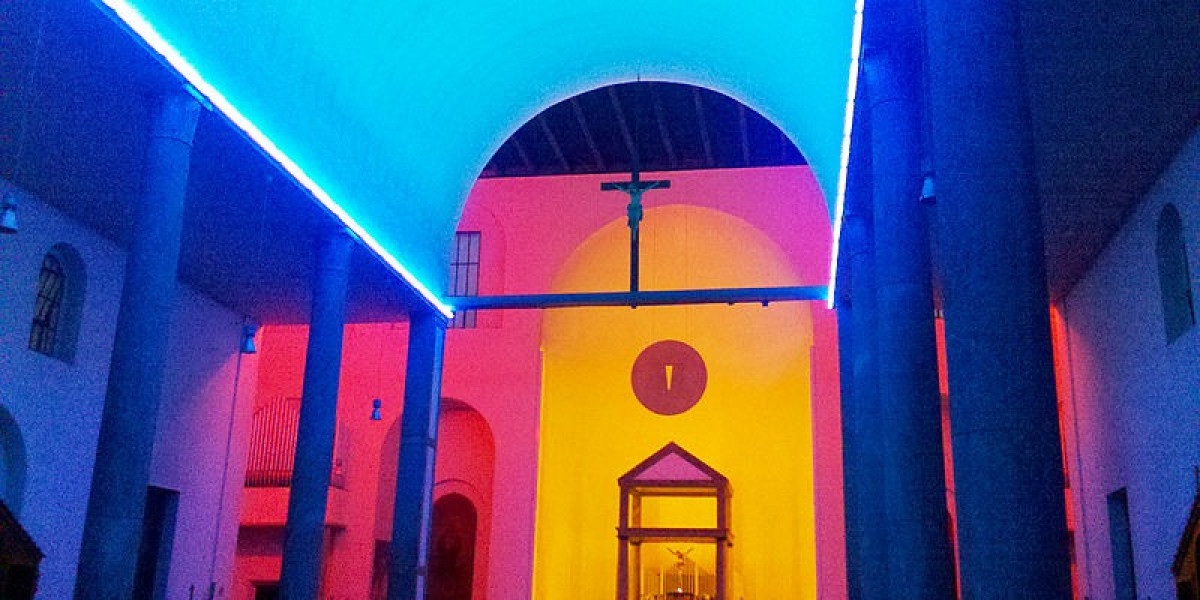 The art of Dan Flavin and his light sculptures are extremely popular in the panorama of Contemporary Art. Art History is full of artists that have worked with light, but perhaps none more than Flavin has chosen it as the main medium of his own art practice. Light is the tool through which the artist concretely sculpts his objects: it is his trowel. Fluorescent tubes, bulbs, led, electric lights, these are the letters of Flavin’s personal alphabet. Following the work of this American Minimalist artist, we can utterly understand how light could become a fascinating language. Light can change architectural space in ways we cannot even imagine; it breaks the rules of the four-walls, disrupting or reassembling them.

Dan Flavin’s work became popular in the 1960's and it is currently preserved in major Fine Arts Museums and the National Gallery; after his death in 1996, several retrospective exhibitions have been organized to celebrate his fruitful career. In 2011 Christie’s sold one of his light sculptures to the tune of around $1 million and his artefacts1  have been appreciated in private art collections all over the world. But what are the causes of this global success? What makes Flavin’s light installations so special? At first glance, they could seem just fluorescent tubes and light fixtures, but all of them inexplicably speak to us.

In this article, we will investigate the secrets of Flavin’s art. We will discover how his radiant objects literally make the walls talk.

Flavin was one of the most influential artists of Minimalism because he radically changed the relationship between art and space. His light sculptures went beyond the limits of sculpture itself. They involve the surrounding environment, becoming a grandiose mixture of sculpture, painting and architecture. He created geometrical configurations of fluorescent tubes on the walls or corridors, rooms full of saturated and multicolored light; Flavin’s interventions were the very beginning of Installation Art, a tradition on which contemporary art practices are also rooted2 .

According to the artist, sculpture was no more a figurative medium, it was functional to create a particular space. That is why the artist often defined his fluorescent installations as “situational” 3.

Flavin’s art is not only site-specific, created to exist in a specific location, it also creates a “situation”. The artist chose a set of conditions of space, time, relation with the audience, in order to create an authentic event. A person could live this experience only in that place and in that moment.

2.   He Used Only Industrial Materials, But With Personality

The minimalist art of Flavin is characterized by the use of industrial and commercialized materials. But there is one particularity in his practice: these objects, even if produced in series and apparently anonymous, seem to have their own personality! The artist used fluorescent strip lights and tubes -his recognizable signature-, and on some occasion circular lamps for his installations. Fluorescent tubes were always of the same length (120, 180 or 240 centimeters) and standardized colors (ten variations, which also included four shades of white4). The emotional engagement results from how Flavin combined them: he displayed tubes as fencelike barriers across doorways, he built frames which seem like magical portals, he configured vertical or crossed installation. The power of the intense color of the tubes added to the glowing emanation of light created unforgettable effects.

Dan Flavin's work also reminds us of the ephemeral nature of our commonly used materials.  His art sculptures are not made of precious, valuable metals; their LED or fluorescent light is subject to obsolescence5 . Just think that many of the artist’s original light bulbs are no longer available in commerce! However, they reveals to us that Modern Art, even if made of perishable materials, embodies a timeless meaning.

3.   He Pondered Light Effects While Working As A Museum Guard

The American minimalist artist did not immediately start creating light installation. He studied Fine Arts and his early interest was Abstract Expressionism, the most popular artistic tendence of the 1940's and 1950's. He made assemblages and collages, combining them with paintings and watercolors. In 1961 he worked as a guard at the American Museum of Natural History in New York. The long hours spent looking at the gallery’s walls inspired him: he started sketching sculptures combined with the power of electric light. It was an epiphany6.

From that moment on, Flavin began investigating light effects, realizing his first assemblages -which he called “icons”-, where he matched light with monochromatic canvases. He went further, exploring the possibilities of his iconic fluorescent tube, that became the basic form of all his practice. In 1963, he discovered “the personal ecstasy” of diagonal effect, creating The diagonal of May 25, 1963 (to Constantin Brancusi).  The diagonal light was able to create dynamism and vibrancy on the walls. With this revolutionary gesture, Dan Flavin rejected all the features that distinguished sculpture as a static medium, immovable, and stuck in the past7 .

4.   His Sculptures Are Dedicated To People, Especially to His Wife

Viewing a contemporary art exhibition of Dan Flavin’s work brings the audience a sense of intimacy and closeness to the artist. Despite the cold appearance of his fluorescent installations, several sculptural objects evoke some sort of human presence. The artist was accustomed to dedicating his art to friends, family members, to museum workers who mounted his sculptures, to colleagues like Donald Judd, even to his dog! These dedications also included historical artists whom Flavin held in great esteem, his debts as a person and as an artist.

These personal dedications were put in brackets in artworks’ titles, and they reveal the emotional part of Flavin’s art. He was a minimalist artist who rejected the objectivity of this art current, in order to tell something about himself: that’s another fact that makes his light fixtures so intriguing8 .

He dedicated an entire series to Vladimir Tatlin, the revolutionary Russian constructivist, and to his unrealized project Monument to the Third International. Through this sculpture made of prefabricated fluorescent tubes, exhibited also in the Tate Gallery art collection, Dan Flavin declared his fascination for Constructivism and for his ideals: "real materials in real space". The artist also honored the symbol of a movement that was never constructed, because of an ironic fate. He finally materialized, through his white, fluorescent light, the ghost of Tatlin’s unfulfilled project9 .

Flavin also created contemporary art for artists we would never expect as his precursors, like Henri Matisse. The untitled (to Henri Matisse) sculpture is now preserved at Guggenheim Museum, and it hints the interest of the artist for the medium of painting, too. The use of pink, yellow, blue, and green -the colors of commercial fluorescent lights of the period- creates a Minimalist glow. It also reminds us of Dan Flavin’s fascination for the French colorist painter10.

The artist also dedicated his installations to “unknown people.” His icon V (Coran's Broadway Flesh) was conceived as a memorial to "a young English homosexual who loved New York City." Flavin created a frame of fluorescent light bulbs, around a red, painted-wood ground. The bulbs symbolically became in the artist’s mind like “candle” lights, but they also represented the fluorescent lights of Broadway11.

Nothing in Dan Flavin’s art is without emotions. This sensitive disposition reached the peak with the installations dedicated to his wife. In 1992 Flavin filled the Rotunda of Solomon R. Guggenheim Museum with fluorescent, multicolor lights. During this exhibition, he married Tracy Harris. He also realized one of his most intense installation: to Tracy, to celebrate the love of a lifetime. The minimalist sculpture consists of a large-scale column rising from the floor and radiating soft, pink, electric light. It is the symbol of a rock-solid love and, at the same time, a celebration of it12 .

5.   One of His Most Fascinating Installations Is In A Church

In 1996, the Italian priest Giulio Greco asked Dan Flavin to create one of his installation in Milan. The chosen location was Santa Maria Annunciata in Chiesa Rossa Church, in Milan. The American artist imagined a site-specific project, as part of the bigger project of renovation of the church. The project has been realized one year later, after the death of Flavin, and at that time the artist was commemorated with an important retrospective exhibition.

With Untitled, Flavin investigated with his recognizable fluorescent tubes the architectural space of the church; he used green, blue, pink, golden and ultraviolet neon lights to underline the elements of the nave, the transept, and the apse. The fluorescent light became the only light source of the space, and visitors can follow it in an immersive experience.

The intervention of the artist in a church was not so bizarre: Dan Flavin knew theology, he studied for the priesthood as a young man, he grew up in a family of Catholics. Anyway, he always refused the spiritual interpretation of his “light objects”; even in Chiesa Rossa, he denied any kind of mystical, transcendent, intention. The use of the light in Flavin’s work is always related to the space; it is something physical, actually embodied in reality, not a divine presence.

“One might not think of light as a matter of fact” -he once said- “but I do”. And after having seen how Dan Flavin’s art can transform the environment, we will just have to take it on trust.

Cinzia Franceschini - is an Italian Art Historian specialized in History of Art Criticism, with a second degree in Communication and Sociology. She studied in Padua, Brussels, Turin and wherever you can go with the power of the Internet.  She works as guide in Museum Education Departments and as a freelance writer. She writes about Contemporary Arts and Social Sciences, mostly about them at the same time, in an inclusive, feminist, transnational perspective.