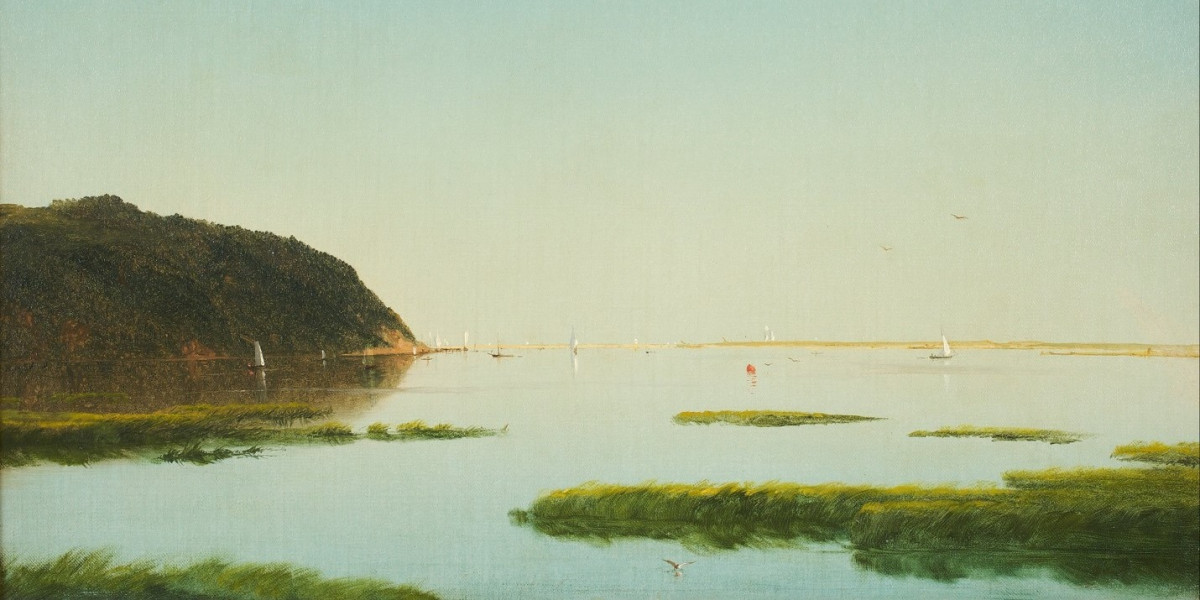 In the 1850s the United States of America was a cultural backwater.  As a former British colony yet to make a name for itself and without its own cultural identity, what set America apart from Europe was the wildness of the American landscape. While the east coast of the country had developed large, dynamic urban centers, the rest of the country was unblemished countryside with rolling hills, sweeping plains, and even dramatic desert caverns. In the 1850’s the country was rapidly expanding.  Pioneers and prospectors drawn by the Gold Rush were traveling by foot and horse and covered wagon across a great landscape, internalizing it into their core body experiences, connecting to the landscape both viscerally and in their imaginations.  Concepts of manifest destiny and western expansion came to a climactic head in the rapidly changing young nation. Unsurprisingly, the frenetic changes the country experienced acted as a wellspring for new ideas, with a uniquely North American perspective.  Into this context add American landscape painters, influenced by Europe’s impressionism and American transcendentalist artists and writers, who invented their own approach to the new world painting.  Their paintings, many of which are now housed in museums as beloved American landscape paintings, are representative of American Luminism.

So, how does Luminism fit into art history?

Luminism finds itself at an inflection point within the tradition of landscape painting.  17th-century Dutch painters such as Jan Vermeer found themselves depicting the natural world. However, landscape painting took off in the late 18th and early 19th centuries. Romantic painters in Britain such as John Constable and JMW Turner found themselves taken by nature's wild beauty. These artists were fascinated by the poetic concept of nature; often their works showed rushing waters or ruins overtaken by growing greenery. Mother-nature for the Romantics was a powerful force with more strength than society or the empirical concepts that buttressed the societal power structure.

Tintern Abbey is a ruin deep in the misty, Monmouthshire countryside in Wales. It was an emblem of the Romantic movement. Tintern had been a stronghold of the Cistercian order built in the 12th century. Following the break with Rome in the 16th century, the cathedral fell along with any evidence of Catholicism in Britain. The grand structure still exists with a few flying buttresses and the outlines of looming windows that once held the stained glass. It was the perfect example of how nature took over the once-powerful structure.

The former cathedral had beauty in its ruinous state. Many romantics found inspiration from the building; artists JMW Turner and William Havell painted depictions. Notably, Turner painted his impressions of the morning light at the site. The looming walls and remaining clerestory windows offered an abundance of light and shadow. However, Tintern canonizes itself with poetry; William Wordsworth's "Lines Written a Few Miles Above Tintern Abbey." In this location, the nature of the outdoors and the nature of the human psyche came together.  This concept was taken and heightened by the Luminist movement in North America.

It is also notable that Europeans on the continent were forming the beginnings of an Impressionist movement within this period. The works of Eugene Delacroix, which frequently depicted iconic moments in the history of the French Republic and even Turner's atmospheric landscapes, made an exploration of the moment. Impressionism, in its broadest sense, is the distillation of a single moment onto a canvas. The moment lends itself to the loose, languid brushstrokes. A moment in time is so short that it lends itself to neither perfection nor clarity. Focusing entirely on composition would detract from the fleeting, meditative quality of the work. In traditional art schools and salons in Europe, this caused a great stir while perhaps inspiring some American artists. After all, moving and shaking the status quo is a concept that America embodies.

So, what about America?
Luminist Art was not a European phenomenon.

The cultural influence of Europe over America loomed largely. American intellectuals and artists were viewed by their European peers as country bumpkins in the scheme of cultural history. It was not until the 1930s when historians turned a more critical eye to American art. The differentiation between the Hudson School and Luminism did not even occur until 1954 when Whitney Museum curator John I.H. Baur declared it so. Baur was an early champion of American Art, holding curatorial seats at both the Whitney Museum of American Art and the Brooklyn Museum. It was his passion and vision for American culture that even created the concept of Luminism. Some art historians have called Luminism a genuinely indigenous American style. However, endemic may be the more appropriate term. It grew here and sowed itself from the seeds of American idealism and philosophy.

American artists in the 18th century were not agnostic to the phenomena of Europe. Romanticism did make its way to the United States, but it was exposed to the fresh air and new American ideas and transmuted into something uniquely our own. America was known for its wild, untamed landscape, which drove an influx of European-born artists to American shores. This set included Thomas Cole. Cole was born in Lancastershire, England, and moved with his family to Ohio in 1818. It was here the young man became fascinated with the vast wilderness North America offers.

This fascination with American nature drove Thomas Cole to create what would be known as The Hudson School. The Hudson School took considerable influence from the Romantic movement, where the English countryside was more rural, the Americas were wild frontier. American tradition painters are what they could also be called. It's the Hudson School because the Hudson River Valley served as an outpost of the Plein-air paintings. However, artists in this style worked as far north as Vermont and Maine and into southern New Jersey. An image that remains seminal to the Hudson School discussions is Thomas Cole's "The Oxbow." This painting depicts a spread of the Connecticut River valley from a high cliff. There are wild gnarled trees and a lush river basin that stretched for miles without disruption from structures.  It encapsulated the American concept of wide-open spaces. A strong case for realism in American landscape painting.

So, how is Luminism Different?

While Luminism only became differentiated from the Hudson School in the 1950s, there was always a visual difference and perhaps a contextual difference as well.  Luminist painting is notable for the hazy, atmospheric nature of the work. In contrast, Hudson School landscapes were soft and lush like moss. The Luminist results had a different demeanor. A clear response to new world pain rather than old world tradition. Something hung heavily over the image, almost like a glaze.  Frequently these works depicted a precise moment in time and often featured atmospheric weather patterns to punctuate this idea.  Sometimes the Luminist ideas would come across as menacing. Within the soft haze, there existed nightmarish clarity. There were none of the telltale painterly strokes to differentiate a painting from reality. It was like impressionism but without the slapdash, painterly signature.

Martin Johnson Heade embodies the luminist ideal with his depiction of a storm coming in across Narragansett Bay. The subtle changes in tone and the feeling of heavy humidity are palpable in his work. So too for John Kensett Frederick, who depicts a balmy afternoon on New Jersey's Shrewsbury River. These artworks have a more rarified and sublime presence than their Hudson School cousins. Control is a concept that comes to mind. Luminist nature is not wild but restrained to a single moment.

Philosophical influences of the time likely played a role in the development of Luminist thought. While artists were painting nature, others were doing a lot of thinking about nature. In the 1830s, Transcendentalism came onto the American scene.

Transcendental thought was influenced by Romanticism but also by Kant and German idealism. It was a philosophy born out of Harvard Divinity School and the Unitarian Church. Ralph Waldo Emerson and H.D. Thoreau are prominent thinkers from Transcendentalism.  Their guiding concept was that there is an inherent goodness to all people and nature but that society was a corrupting factor. They believed in individual freedoms but also empirical science, differentiating themselves from their European Romantic counterparts.  Their affection for nature made for staunch conservationists who were strongly opposed to rising capitalist influences and the westward expansion.

There was a strong belief in going back to nature and keeping the Americas wild. Transcendentalism espouses works like Thoreau's Walden,  a profoundly influential literary meditation reflecting on Thoreau’s experience living in-the-moment with nature, without society. It is worth noting that Thoreau still met with friends and sent out his laundry during his time on Walden Pond.  Perhaps, whole-hog transcendental idealism isn't a logical reality. After all, it is the high society that came up with these notions. It is easy to be idle when you are independently wealthy.

Perhaps luminism can be best described through the lens of Transcendentalism and transcendentalist artists. Transcendentalist, luminist ideas make themselves apparent on the canvas. The depictions they paint are tiny, tranquil meditations on nature. European impressionism offered a sensual experience of the moment rapt with bright colors and vigorous brushstrokes. American impressionism brought a more puritanical and simplistic angle.  Each luminist painting is a moment in time with the natural world exactly as it is, right down to the last droplet of humidity.

Inspiring Next Phase of Art

For a long time, the common thought was that there were no great American artists. Some said that American artists recycled European ideals into hollow copies. Yet, Luminism provides an example of the subtlety in American thought. The careful intertwining of new viewpoints with old ideas.

There has always been great American art, but there have not always been eyes keen enough to pick up on sublime American simplicity.

Nicole Lania is an art historian and writer who has years of experience finding genuine creativity in a world of thinly veiled reproductions. She earned a master’s degree from New York University with a focus on contemporary art and writing; her thesis was on the impact Christo’s The Gates had on the cultural capital of Central Park and the surrounding neighborhoods.  She can be found walking her dog, Tucker through the New England wilderness or baking pastries in her kitchen. Nicole can be found on Instagram @nik.lania, Twitter @NicoleLania1, or her website http://www.nicolelania.com/.