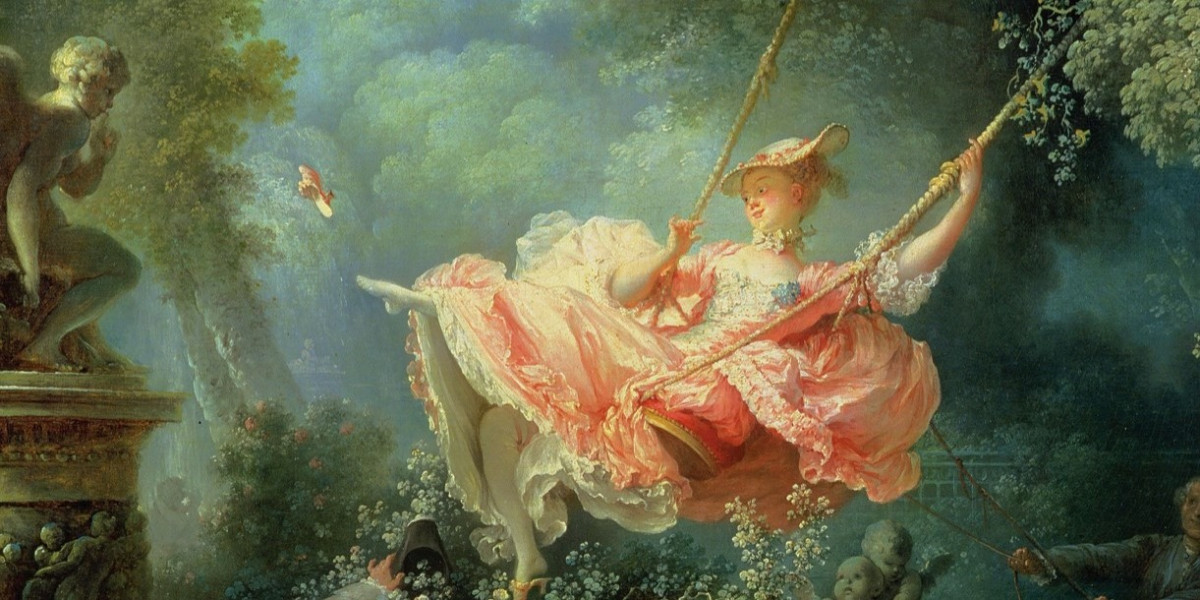 Rococo Art: An Untold Story of the Ancien Regime

Sofia Coppola’s 2006 masterpiece movie, Marie-Antoinette, is a veritable love letter to the Rococo art movement and the ancien regime of French aristocracy. The plot is simplistic and historical, allowing the viewer to relish in the delights crossing the screen. The scene where Kirsten Dunst, as the titular Marie-Antoinette, and her ladies try on shoes, encapsulates Rococo style. Shoes in every imaginable color and trim pass the screen. Each looks like a petite patisserie in pastel colors. Speaking of pastries, many delectable sweeties make an appearance.  A particularly notable fur-trimmed shoe appears and then very briefly a delpht blue pair, Chuck Taylor, high-top sneakers. The sneakers are an anachronism, to be sure, but their pastel hue encapsulates the era's desired palette.  There are also towers of foaming champagne, richly dyed silks, jewels, gambling, puppies, and mile-high wigs complete with ostrich plumes and birds. Before the scene ends, Dunst asks one of her attendants, "It's not too much. Is it?!" It is over-the-top and intoxicating. At its core, Rococo style is just that, highly decorated and maybe a little too much. While regarded even in its time as silly, the Rococo movement mirrored European society's cultural underpinnings at the time.

While Rococo may sound like the call of a brightly colored, tropical bird, the style gets its name from rocaille. Rocaille is an art form that uses stones and shells along with cement. The shape of the shell, in particular, is echoed across the genre for its curvilinear edges and undulating divots.  Technically speaking, Rococo is the final frontier of the Baroque style. It is sometimes called late Baroque. Rococo art appears a far cry from Caravaggio's paintings of shadowy, penitent saints or Rubens religious scenes and large women. On the surface, Rococo gives the impression that it's just not that deep.

Rococo was coined as a derogatory term in the 18th century in light of the pastel-hued, frivolous designs. Art Historians adopted the name "Rococo" and the stance that it was silly. It would not be until much later that modern and contemporary artists would recapture the colorful and curvy style. The Rococo influence crossed over into all genres of art. It even made its way into the performing arts. It also existed as decorative art: furniture, glassware, and interior decoration. The widespread appeal of Rococo may in part be why it was considered "silly." Unlike the great paintings and sculptures of the era, decorative art was often the domain of female artisans and less critical.

What Philosophies Lead to the Rise of Rococo Style?

Rococo art's center was in France, but the artistic style caught-on across the European continent and Britain.  Birds, flowers, angels, musical instruments, and far-east imagery (Chinoiserie), curves & counter curves, and interlocking ovals were all common themes in the artwork.  The organic lines came from Roman antiques from sites at Herculaneum and Pompeii, respectively. Chippendale chairs, famous in England, are examples of how themes from the natural world make their way into decorative arts with their distinctive fretwork on the backs of chairs. These embellishments and layered details epitomize the Rococo period.  As a cultural expression, French Rococo was an exquisite ornamental and theatrical movement that epitomizes the indulgence of the French aristocracy during the reign of King Louis.

The Rococo style petered out near the beginning of the French Revolution, where cultural critics such as Voltaire called out the type as "over-the-top."  Many patrons and owners of Rococo objects went to the guillotine, and the violent justice of the Revolution led to the destruction of many of their precious and indulgent Rococo paintings and decorations. A much more staid, patriotic style called Neo-Classicism was championed by Jacques-Louis David. His famous "Oath of the Horatii" still hangs at the Louvre Museum to this day as an early French Republic emblem.

While the French aristocracy was busy having a party and drinking champagne, the poor were suffering.  This inequity was true in France but also across Europe and its colonies.  The French Revolution would kick-off a generation with many uprisings and instability. Thomas Hobbes famously described life as a common man as "solitary, poor, nasty, brutish, and short." What a time to be alive! And how foolish the rich's behavior must have appeared to the poor who were in a constant state of worry for their lives. Thomas Hobbes, John Locke, and Voltaire were in the same intellectual orbit. When one would become exiled for a time from their nation, they would go to the other.

There was a great deal of Franco-Anglo cross-pollination at the time. Together these enfants terribles, with their dangerous ideas, came up with new world order. Under this context, it is not surprising that many saw this movement as silly. Actively avoiding the poor and relishing in private wealth was and continues to be not a good look. Rococo saw its height during King Louis XV's reign. By the time Louis XVI came on the scene, the style quickly deteriorated. The concepts of freedom preached by the likes of Voltaire had finally found a foothold amongst the bourgeoisie.

Portraying the Posh Instead of the Poor - Rococo Style

Rococo art had a strong tendency toward depicting nature in a rural, idyllic manner. Instead of a place where laborers toiled and struggled, the countryside became a storybook depiction where healthy shepherds fell in love with tender farmer's daughters or posh people picnicked and visited sites of myth and legend. This sweet sentiment is profoundly divorced from the reality of danger and struggle between the countryside and remote villages in Europe.

Rococo painter Antoine Watteau is the spiritual father of the movement. He studied under Baroque artists and took his liberties to create a distinct Rococo painting style.  Correggio and Rubens, titans of the Baroque, were his main influences.  The scenes Watteau painted are known as fêtes galantes. It was genre painting with less didactic intentions than early Baroque. Similar to classical art, Rococo painters incorporated allusions to antiquity, such as in Watteau's "Pilgrimage to the Cythera." But here the reference to Cythera, the birthplace of Venus, is merely used to set a scene—not to cast moral aspersions upon the viewer.  Sometimes Rococo artists instead alluded to contemporary performances in the theatre and ballet to set their stage. This tendency is particularly true of Antoine Watteau and his famous "Festival of Love" which alluded to a scene from an Italian theatrical performance.

Rococo: From Frivolous to Inflammatory

Boucher worked during the reign of Louis XV, at the height of French frivolity.  He notably worked for Madame de Pompadour, the mistress to Louis XV. Art does sometimes imitate life. It is not surprising that the king's tart might want something explicit in her collection of art to clarify where her power emanates. Boucher's "Toilette de Venus." This piece is emblematic of the Rococo period. Notably, a scantily clad Venus lies akimbo where her body draped with luxe silks, and angels attend to her. She holds a white dove to her chest, and another sits at her feet. The woman for whom Boucher created this was Venus personified.

Jean-Honoré Fragonard hailed from Grasse in the French maritime Alps. A perfumery that shares his name still exists there—a faint memory of the sensuality the artist brought to his art. Like Boucher, Fragonard specialized in creating artwork for the petite amies of French aristocracy. He also worked with Madame du Barry and Madeline Guimard, both sometimes mistresses of King Louis XVI.  A large part of the extant Fragnonard works exists in the Wallace Collection in London, England.

Baron Louis-Guillaume Baillet de Saint-Julien commissioned this particular piece.  He was in want of a picture of his mistress (Quelle surprise!), who is the woman pictured on the swing, playfully tossing her shoe. Her poofy merengue of a dress barely hides the explicit undertones with which Fragonard painted the picture. Notably, you can see the underskirts of the woman's dress. Petticoats, while now obsolete, were considered undergarments and most definitely not for public view. So this feminine creature in the swing is effectively flashing the viewer. The tossed kitten heel sailing through the air and the swinger’s bare foot bring the painter and viewer into the ticklish territory of sensual subject matter. “The Swing” remains an enduring example of Rococo style. These carefree moral boundary crossings might be why Rococo and the ambient culture became problematic for the masses whose crushed and colorless lives supported the frivolity of the fortunate few. The reign of King Louis XVI marked a turning point; soon after his coronation, he and his compatriots awaited their death in the Bastille. With the fall of the nobility, Fragonard and Boucher fell out of favor, as did their pleasing pastel colors and sumptuous palettes.

So, What Happens Next?

Art History compartmentalizes itself into smaller narratives. However, none of the stories exist in a vacuum. Art movements abut and interrupt each other and sometimes even reevaluate themselves at a later date. You cannot merely put artistic expression into a box. As the French Republic found its footing, so too did art. Many masterworks of the Revolution are marked by realism and neoclassicism. It would only be later that curves found their way back into the French visual vocabulary. After years of civil unrest and blockades, Parisienne streets were widened into large boulevards, and the curvy Hausmann style apartments began to dot the urban landscape. The housing was functional but not without soft curves and decoration. Color and a dose of provocative questioning returned to the art as well, such as in "Dejeuner Sur le Herbe" by Manet. There is a nude woman at a picnicking party; her naked friend picks flowers in the distance. The pushing and questioning continued, and color returned with Impressionism. Loose green brushstrokes not unlike Fragnonard’s returned to the canvas, notably Renoir and Berthe Morisot's works. [Morisot was the grandniece of Fragonard and the sister-in-law of the Edouard Manet as mentioned above. The art world has always been relatively small.]

Rococo was loud and brash and overindulgent.  It was the art of a society on the brink.  The class conflicts of the 17th and 18th centuries gave way to a more egalitarian way of life in the Western world, but only thanks to a seminal period of Revolution.  Despite the revolutions since the 17th century, not much has changed regarding the considerable divide between the haves and have nots.   What new art will this divide inspire?  What image of unbridled luxury will  be so powerful as to foment change?

Nicole Lania is an art historian and writer who relishes finding genuine creativity in a world of thinly veiled reproductions. She earned a master’s degree from New York University with a focus on contemporary art and writing; her thesis was on the impact Christo’s The Gates had on the cultural capital of Central Park and the surrounding neighborhoods.  She can be found walking her dog, Tucker through the New England wilderness or baking pastries in her kitchen. Nicole can be found on Instagram @nik.lania, Twitter @NicoleLania1, or her website http://www.nicolelania.com/.