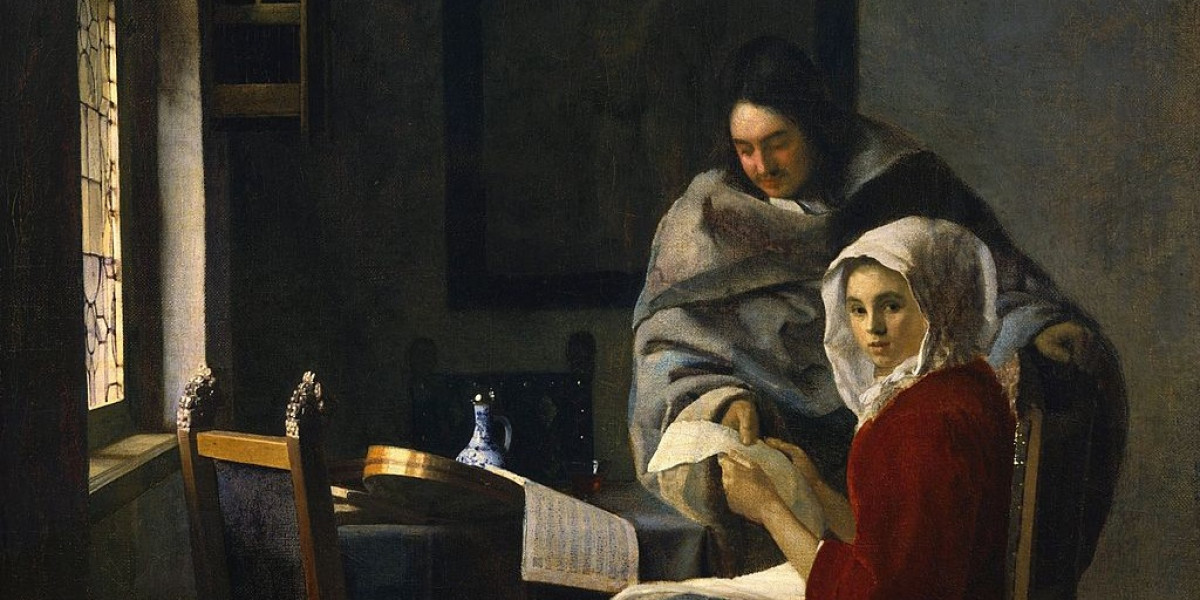 Vermeer uses light as a stylistic concept but also as part of his artistic process. The "how" of artmaking is often a forgotten detail.  Genius usually takes precedence over the artistic process in the discussion of Old Masters.  Yet, his opus remains the most mysterious and stumps centuries of historians. Is it possible he harnessed early camera technology to capture his scenes? How did he achieve that pearly, dream-like finish on his artwork? Vermeer's voyeuristic interior scenes are only part of the equation; his mastery of light unearths a larger narrative.

As images resonate with each other through time it reminds us that stories are told in many ways and that both images and words cast shapes on our memories that bear repeating.  We stretch our old stories onto our new realities to comfort ourselves with their familiarity and to allow ourselves to adjust to our changing world.

In this, we can see that an image as powerful as Vermeer’s Girl with a Pearl Earring will resonate through to our modern era, and mediate our ideas of connection with the past.

It would be remiss if we didn't begin our discussion of Vermeer with Girl, with a Pearl Earring.  In the context of mainstream media, this painting by Vermeer is by far the most famous.  Perhaps you are familiar with the painting through having seen a film with the same name, starring Scarlett Johansen.  The film provides an entry point into Vermeer's work.

Although the image's Hollywood appeal is immense, there are inherently intriguing qualities about the painting.  The bright blue worn by the model is striking against the dark background, the "Turkish" headdress captures deep shadows, and the model's skin seems to glow in an unearthly manner.

Yet, the eye is drawn almost immediately to the large pearl hanging from the model's ear. It shines brighter than the rest of the painting. Vermeer punctuates the shine with a white dot known as a pointelle.  The pointelle appears across the work of Vermeer but this denotes a prime example.

It is possible! Pearls were very fashionable at the time and owed newfound popularity to the proliferation of imitation pearls. French rosary makers began using fish scales to imitate the soft shine of pearls. The common woman could own a piece of jewelry once relegated to only the wealthiest people. Pearls especially hold a connotation of feminine beauty and purity, making them ideal for this painting. It is a lit-from-within painting, the likes of which remain unmatched.

2. He Focused on Interior Scenes (and the human psyche).

For an artist who concerned himself with light, it comes across as counterintuitive that almost all his known works are of dark interior scenes. Dogma, however, drove the bus in terms of subject matter, not artistic curiosity.  Catholic artists of the time, such as Caravaggio, focused on religious scenes painting. However, in Calvinist Northern Europe, they did not believe in religious figures in art and preferred to depict human folly realistically with the common man.  The subject matter is morally essential. Interiors also impacted the scale of art and its popularity. Bare churches meant that public art was mostly absent in Holland.

Therefore, art became popular in domestic settings. The scale of art changed to fit inside the narrow row houses popular in Holland. In many ways, Dutch Golden Age paintings brought light into otherwise gray interiors. Dutch homes were dark and limited spaces by design. City dwellers lived in row houses rather than detached homes, thus decreasing the light sources from two sides of the building. Vermeer masterpieces had a lighting style that used the same formula. A window would let light in from the left side of the canvas and shed light on a figure(s) recessed slightly into the distance. The story Vermeer's canvas tells, however, likely isn't as dull as it appears on first viewing.

3. David Hockney is a Big Fan

British portrait artist David Hockney took influence from Vermeer, particularly in his treatment of light.  Perhaps what makes Hockney so compelling is his usage of light and shadow. All at once, his works come across as modern and out of their time.  The lighting schemes are familiar, owing to the Dutch painter, Hockney often relies on outside lighting sources like Vermeer such as windows, mirrors, or even pools. Hockney renders images simplistically, with one foot in the 17th century and another in the 1960s. It is classical and pop art all at once. Take, for example, the 1971 masterpiece, Mr. and Mrs. Clark and Percy. He paints his friends Ossie Clark and Celia Birtwell, a clothing designer and textile designer, respectively. In a nod to Vermeer, Percy, the couple's white cat, sneaks into the lap of Mr. Clark, almost as illicit details do for Vermeer. It seems by no mistake that Hockney took particular interest in Vermeer. He is behind one of the most contested art historical theories: the Hockney-Falco Thesis or the idea Vermeer used a camera to aid his work. A camera in the 1600s sounds crazy, but there were already early iterations in existence at the time. His thesis suggests that Vermeer and his counterparts used early cameras to achieve perfection in their paintings due to specific details that seem warped or too detailed for a bare eye alone. However, the concept should not detract from the work; it adds richness to an artist whose career is still a mystery.

4. Many Mirrors Were Involved

If it is shocking, Hockney suggests using a 17th-century camera. One needs to be generous with their definition of a camera. It is not like the DSLR used to take school portraits. A camera obscura was used and relied on mirrors and light to reflect an image, like an overhead projector. While they are not what comes to mind when one thinks of a camera, the same concept prevails today.  His works appear to be photorealistic but slightly warped, almost as if a vector image stretched too far.
Read also: Famous Photographers

The most commonly cited composition is The Music Lesson. Here an upper-class young woman stands at the virginal, foregrounded by a lush interior, including a highly patterned draped carpet.  The checkered floor collapses into perspective with the back corner of the room. The rug is oversized and similar to what appears in contemporary furniture stores.

In the mirror, you can see the feet of an easel, presumably Vermeer's.  The interior is lifelike, but what suggests the use of a camera? The artist's pointelles or circular reflections on shiny surfaces like ceramic, glass, brass, or polished floors indicate a mirror's use. Rounded reflective surfaces catch light this way like a bulb-shaped Christmas ornament.  That fabulous carpet is a giveaway for the use of reflection. Check out the mirror. It's there too.  Both the exact patterning and texture jump from the canvas in a way that cannot be created by an artist's hand alone. Johannes painted many pictures in this same room. It seems he leveraged the bright lights from windows to project onto his canvas.

5. Beavers and Pigs Were Essential to Vermeer's Artistic Practice!

Despite questions surrounding the work, color theory is what made these works pop.  The sparkles and shadows dominating Vermeer's canvases would not exist without a careful understanding of color. The first layer was gesso, then a layer of shades of tan. These restricted the lightest lights and darkest darks.

Before adding color, the painter needed to obtain his pigments. Artists got colors in two different ways: either by hand with pigments in the studio or through the acquisition of pre-mixed paints. The artist would also need pig bladders; there were no voodoo rituals involved in Vermeer's practice; he used a bladder for storing paint.  Each pigment may require more or less drying time than another due to the lack of standardization in paint recipes. While there were commercially available paints, they offered less control because they came pre-mixed, making them harder to adjust to a shade the artist wanted. They were also more expensive than making it in the studio using custom pigments.  Even the most exquisite color would not give the glossy, iridescent effect that made Vermeer famous.  Some owe to this his usage of a badger brush because it created very smooth strokes. Incredibly the cantankerous animal has very sleek fur. Although badgers will likely not be at the local petting zoo, they were a small animal plentiful in the Dutch countryside.  But what about the sparkles? It is more likely the result of the glazing or the subtle addition of varying levels of shine. The glaze would catch the light differently in different places, making the lighting appear diffuse and as real as the viewer's room. For example, shiny surfaces like metal or glass, or marble might catch more light than the sumptuous fabrics also found in the paintings. Strategically, Vermeer added shine. Then a pearly sheen across the canvas created a diffuse lighting situation.  His work is about layers but, it cannot divorce itself from the little people or creatures whose byproducts help complete the job.

Art Historians cite Canteletto, Sir Joshua Reynolds, and Vermeer as painters who captured their work through a camera. Cameras make some critics cry fraud and create a problem for art dealers, making Vermeer collections valuations. However, understanding the math and science of perspective is a skill, and Johannes Vermeer's works exist in Louvre collections--two strong value indicators. It is the quality of a lighting situation he creates which makes his work stand out.  The light feels very natural and brings liveliness into what one could regard as merely another painting of a mundane subject. He brought life and subtle complexity to an era that one could easily dismiss as simplistic. A closer inspection of Vermeer's painting shows his mastery of the Dutch Golden Age's protestant moralism and provides a unique look into the quotidian dealings of ordinary people of the time. He sheds light on individuals who work for a living, not royals or religious figures. It is the light he sheds on the normal man that make him an enduring figure. His work poses more questions than it asks, and it continues to generate centuries of fodder.

Nicole Lania is an art historian and writer who has years of experience finding genuine creativity in a world of thinly veiled reproductions. She earned a master’s degree from New York University with a focus on contemporary art and writing; her thesis was on the impact Christo’s The Gates had on the cultural capital of Central Park and the surrounding neighborhoods.  She can be found walking her dog, Tucker through the New England wilderness or baking pastries in her kitchen. Nicole can be found on Instagram @nik.lania, Twitter @NicoleLania1, or her website http://www.nicolelania.com/.