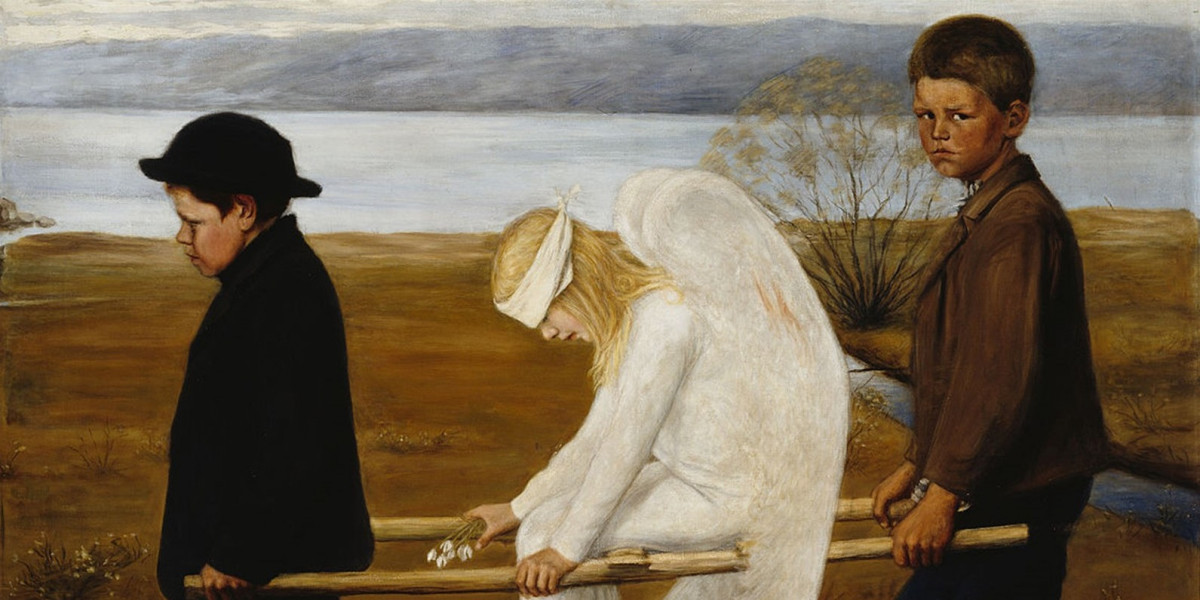 Through different periods in art history, artists have played with and variously manipulated symbolism in art, including the symbolism of light. Some used it as a symbol of an idea or an emotion. Others harnessed light to accentuate the message of their pieces, creating new art techniques that relied on exploring light's many forms. With the emergence of symbolism, a 19th-century art movement, light became the central motif of many artworks, used not only as a symbol but as a force that forms the piece.

In this article, we'll investigate the symbolism of light through various periods by examining different art pieces. We'll explore its many iconographic layers and demonstrate how artists utilized light to construct a story with their works.

Light as a Symbol in Religious Art

Every religion in the history of mankind is based on the same primal concept – the eternal fight of good and evil.

The two most basic natural phenomena, light, and darkness became symbols of these forces. Artists have been using them for centuries to emphasize the difference between natural and unnatural, divine and earthly.

The symbolism of Light in Ancient Egyptian Art

Creation myths of many ancient religions claim that the world began with the emergence of light from the dark. The same analogy is present when describing the end of the world or the apocalypse – the light will disappear in the final, all-consuming darkness.

This contrast is clearly visible when examining the pantheons of ancient divinities. The "good" gods dwell in the heavens, where there is light. The underworld, filled with "evil" divinities, is usually described as a place of eternal darkness. When a soul departs from Earth, it either goes to light, where it enjoys eternal life, or to the underworld, where it spends eternity in chaos and dark. In this context, the light becomes the symbol of life and immortality, a concept that many modern religions adopted in their teachings.

This duality of light and dark is what the Ancients explored in their artworks, using light as a symbol and a medium, to give them a deeper meaning.

The Egyptians were masters of manipulating natural light when building their architectural wonders. They used it to emphasize their religious beliefs. Great examples are the famous Abu Simbel temples, built during the reign of Pharaoh Ramesses II in the 13th century.

The symbolism of Light in Ancient Greek Art

The Greek civilization has always worshipped light, and it shows in their art. Such was their fascination with it that light became the object not only of their visual art but of their poetry, cosmogony, religion, and mythology. (Christopulous et al., 2010: 11)

Light as a Symbol in Judaism

In monotheistic religions, the light remained the fundamental symbol of divine nature. As in the creation myths of ancient religions, light plays a central role in the genesis of Judaic and Christian God.

Light as Symbolism in Christianity

Light is an integral part of Christian art, iconography, and symbolism.

During the Middle Ages, Western art took on a new approach to using light. Instead of using it as a symbol of the divine, represented by a certain object such as a torch or a menorah, artists started exploring the many forms of light, using it as a medium to accentuate a certain aspect of their pieces.

The rise of humanism and science in the Renaissance, especially physics and astronomy, allowed the artists to study the optical properties of light. The champion of this movement was Leonardo da Vinci. He experimented with light and optics, using knowledge of physics, biology, and anatomy, to determine how to create different perspectives in his paintings.

The crown of his explorations is The Last Supper, a masterful presentation of a game of light and shadow. Despite the Bible stating that the supper happened in the evening, Da Vinci chose to set his scene in the daytime (visible in the windows in the background), which allowed him to use sun rays to play with the light-dark contrast in the painting. The shadows on the floor, however, clearly show that there was another source of artificial light, a candle, or a torch in the bottom left corner, adding to the realism of the painting.

Da Vinci also paid close attention to the spatial arrangement of characters, which was important in determining the reflection and refraction of light among figures and objects. He outlined the movement of the rays of light, and carefully chose how each ray caused illumination and shadow on the faces of the characters. (Bitler 2011: 32).

There was much discussion on whether Leonardo deliberately omitted painting a halo over Jesus's head. Some scholars claimed that the light from the windows behind him served that purpose, while others suggested that the missing attribute reflected the human nature of the Christ, which had yet to endure the Passion and ascend into heavens.

The Last Supper is a great example of how Leonardo and other artists of this period, such as Caravaggio, infused art with realism and introduced "depth" in painting, along with new techniques that explored the usage of light and shadow,

Light in the Symbolism Art Movement

In the late 19th century, with the emergence of the symbolism art movement, light again became the subject of art. Jean Moréas, a French critic, coined the term in his famous Symbolist Manifesto.

Artists used symbolism to reject the realism of impressionism and naturalism and use symbols to create imaginary scenes. Though very different in their artistic expressions, they all shared a tendency to convey ideas and emotions through symbols, thus giving form to their dreams and visions.

Symbolist art is generally very dark, with a gloomy, almost morbid atmosphere. To accentuate the symbolic difference between light and dark or good and evil, symbolists harnessed the power of colors, creating rich color symbolism in their works. The Wounded Angel, a painting by Finish artist Hugo Simberg, demonstrates this perfectly. 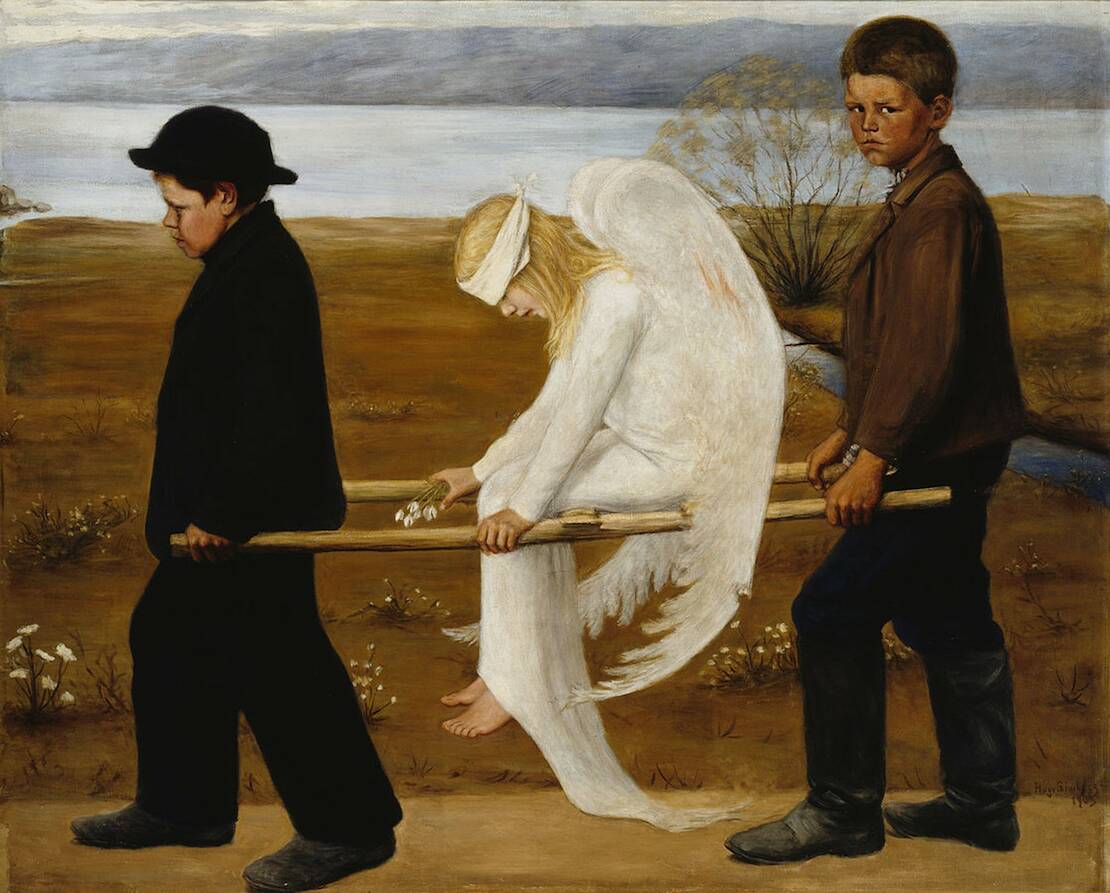 It shows the procession of two boys who are carrying the central angelic figure. The bearers wear dark clothes, which separates them both symbolically and visually from the angel, who is dressed in bright white. She is wounded – there's a bandage over her forehead, and blood on her wing. To understand the symbolism of the painting, we must understand the artist's motive behind it.

Simberg suffered from meningitis, a disease that causes neck stiffness, lethargy, and light sensitivity, each of which is exhibited by the central figure. The wounded angel is clearly a representation of the artist, and the bunch of snowdrops which she carries in her hand, are a symbol of hope, health, and rebirth.

Another great example of how symbolists used colors to express their ideas is a painting called The Dance of Life, by the famous Edvard Munch.

Sokol Gojnik, Z., Gojnik, I., Bojanić Obad Šćitaroci, B. Light as a Symbol of Sacred Architecture, in: Theory and History of Architecture Conference ARCHTHEO'15, Istanbul, 2015.

Tea Fumić is a professional historian, writer, and an art enthusiast. She holds a Master's degree in Ancient History, and specializes in researching and writing about ancient civilizations, religions and mythologies. Her contagious passion for history and art prompted her to pursue a career as a museum curator and educator. She enjoys digging through old archives and manuscripts, wandering around museums and galleries, and hiking in the mountains of her native Croatia.