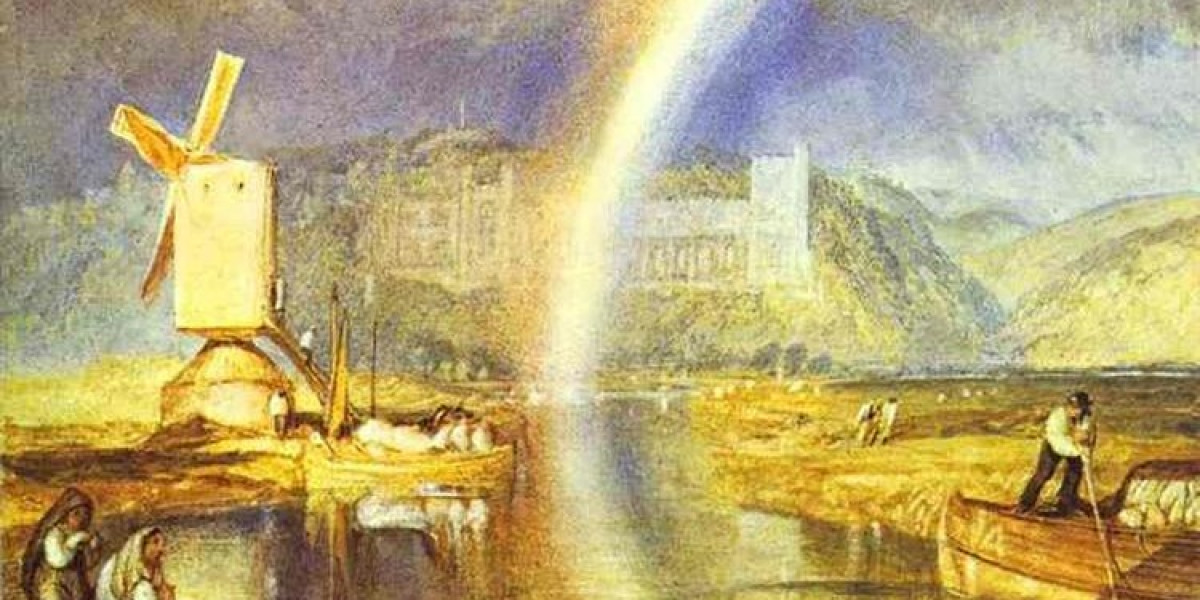 ‘Be thou the rainbow in the storms of life!' recited the romantic poet Lord Byron in his heroic poem The Bride of Abydos. Be like the rainbow, -bright, light, unexpected- that amazes people at the window after a violent storm. The rainbow is a meteorological and natural phenomenon that surprised and continues to surprise humankind, awed by its ephemeral existence. It has been the protagonist of ancient myths, a premonitory sign in popular legends, a biblical and literary metaphor, but also a political and social symbol and a source of inspiration for artists throughout centuries. The rainbow’s silhouette in the form of a perfect arch is an ideal bridge between earth and sky. Therefore, it took on very different and transcendent meanings according to different cultures.

Despite its mystical appeal, the rainbow is a relatively simple optical phenomenon that involves light. When the sun continues to shine through the rain, the ray lights illuminate the raindrops producing refraction and deviating the propagation direction. The water droplets act like a prism: the sunlight is fragmented into seven different brilliant shades of the color spectrum. Then, what we could see are the seven rainbow colors which we also deepened the symbolic meaning in the previous articles: red, orange, yellow, green, blue, purple and violet. Rainbow is a blurred optical illusion: it made us suggestively think about a promised land to be reached just by crossing this colored bridge. However, the rainbow is a luminous phenomenon that ironically never happens in a specific place, it depends on where you look at it. Just like that: finding that place somewhere over the rainbow is totally up to us.

The rainbow represents a promise of better times. Its colors, so unattainable, ephemeral, and translucent, express something mysteriously prophetic. For this reason, it has often been used in literature, mythology, and fine art, as a metaphor for a colorful bond between human and divine worlds. Among its many symbolisms, the rainbow has been widely mentioned in religions. In the Bible, particularly in the Book of Genesis, it appears after the Great Flood as a divine promise of a new covenant between God and human beings. In Ancient Greece, the messenger who brought the rainbow from the Olympus of Gods to the mortals was the goddess Iris -the word iris used to indicate the pupil of the eyes derives from her name-. In Norse mythology, the rainbow is literally a stairway to heaven, called Bifrost, that links two opposite kingdoms.

However, the concept of the rainbow in oriental cults is very different from Western one: it is a fact of relative perception, like happens in the other cases, color meanings change according to different cultures and eyes. In Asia, the symbol of the rainbow is associated with a mythical serpent, a dragon descending from the sky in the natural world. For the Inca civilization, the rainbow represented a malevolent omen, a divine sanction, and no one should dare to look at it. Also, in Celtic mythology the rainbow hides at the end of the arch a Golden pot, hidden by spiteful leprechauns, representing something precious, strongly desired, but unreachable.

Today rainbows have also taken on meanings that go beyond religion and legends, touching on politics, society, and human values. The rainbow is the icon of LGBTQ+ community rights; it is the symbol that often appeared on walls and windows during the 2020 health emergency to give strength to people and healthcare workers. It is a wish for peace, tolerance, and mutual respect. It no longer represents only a bridge between the earthly and the otherworldly, but also a pier between different cultures and identities. It is a ladder that creates bonds, reconnecting with others. In this article, you'll meet artists who captured the nuances of this natural phenomenon, painting rainbows that create authentic connections between humans, nature, minds, and ideals.

In the beginning, there was a thunderstorm and a divine rainbow. We are not talking about an ordinary thunderstorm, but about the universal flood narrated in the Bible. The book of Genesis tells of a terrible flood that struck the earth, as a divine punishment for being disappointed by human beings: they were not the virtuous creatures he had imagined. Noah, the patriarch known for his righteousness, then built a Great Ark to save the human species and other living beings. What struck the imagination of artists was not only this terrible episode of rain ... but also the rainbow that followed.

In this case, the rainbow becomes the symbol of a new alliance and rebirth; the pact between humans and gods that sanctioned that from that moment all would be well and good. God, by sending the rainbow, established that ‘neither shall all flesh be cut off any more by the waters of a flood; neither shall there any more be a flood to destroy the Earth’, also restoring reciprocal trust.

The rainbow as a symbol of promise was not only depicted anciently in the Bible but also struck a chord with more contemporary artists such as Marc Chagall. The painter of Belarusian origin naturalized French painted in the mid-20th century a long series of paintings dedicated to the biblical theme of Noah, representing visionary rainbows of very different styles and shapes.

However, the rainbow did not only attract artists for its mystical and divine properties. The fact that it was such a fleeting optical phenomenon seduced landscape painters whose greatest challenge was to capture light and its variations on canvas. Guided by optical theory to be applied in the use of pigment, not only the Impressionists but also painters such as William Turner, John Constable, and Georges Seurat sought to depict the rainbow. Turner, whose artistic research often focused on weather phenomena painted it for what it was: a transient explosion of light and color.  The same interest is present in the painting of the post-Impressionist painter Georges Seurat, that using dazzling and pointillist touches of colors to seize the moment.

John Constable, the professional artist Master of Landscape painting who focused on bucolic and rustic settings, caught the phenomenon of the rainbow in its double mysteriousness. He painted through oil paint a double rainbow: one more pronounced, the second as its fainting shadow. He skillfully shows the ephemeral nature of this effect, while capturing it forever on the canvas.

The rainbow fascinates for its variety of colors -sea blue, dark green, but also blood red-. Despite the scientific explanation, this optical phenomenon continued to arouse curiosity and inspire artists beyond the 19th century. Its implications related to the different perceptions of lights offered a perfect field of research for contemporary art. Several artists explored the topic of the rainbow abandoning painting and preferring the involving medium of Installation Art. They produced site-specific installations, sometimes collaborative and participatory, experimenting with colors and viewers’ visions. An example is a mesmerizing rainbow created by the Mexican artist Gabriel Dawe at the Toledo Museum of Art, an explosion of colors that transformed the exhibition hall in an experiment. German artist Markus Linnenbrink also uses the colors of the rainbow to create an installation at Kunsthalle Nuernberg: a room rendered disorienting by colors, a polychromatic labyrinth. And what about the radiant light ring by environmental art master Olafur Eliasson? In 2011, the Icelandic-Danish artist installed a glass gallery with 7 rainbow colors on the roof of the Art Museum in Aarhus, Denmark. It is an iridescent, walkable color circle, made ad hoc to give visitors new filters (and visions!) on the city: your rainbow panorama.

However, the rainbow has also taken on meanings in the art that go beyond its chromatic and optical illusion aspects. Rainbow art in the 70s was used to express pride and support for marginalized communities and identities. In the 1970s, artist and drag queen Gilbert Baker used the rainbow for the first time to represent the LGBTQ+ community. The seven colors have thus become an international symbol of sexual and gender variety and heterogeneity. The different colored stripes represented respectively life, healing, sunlight, nature, art, serenity and spirit, and a demand for respect and equal rights.

This international symbol also has been used by artists to represent the fights for the rights of the LGBTQ+ community, the pride of queerness, but also other struggles such as those related to the AIDS crisis of the 1990s. The artist Derek Jarman used the rainbow palette in his gestural painting to exhibit the violence of AIDS disease, a plague that also killed him in 1994.  In Jarman's artwork, Ataxia-Aids is Fun, the colors create a confused, hyper-saturated, unstable composition; an effect similar to that of ataxia, a nervous system deterioration that causes terrible loss of balance. Jarman uses rainbow colors to convey with dark humor an important message about the homophobic stigma related to AIDS.

A Message of Hope

We live in dark and confusing times. In this complexity, the symbol of the rainbow has often taken on meanings of hope and solidarity. Just think of the rainbows drawn by children during the Covid emergency, a community encouragement from public places and private windows. The rainbow represented a metaphorical bridge, capable of linking people in a moment of physical distance and no contact.

But that is not all: artists also used the rainbow symbol and its transparency as a signal to counter the horrors of war. The English Pre-Raphaelite painter Evelyn De Morgan in her SOS sublimated the violence of World War I by painting a rainbow that reconciles good and evil. The solitary female figure dressed in white symbolizes the victims of war, waiting for salvation.