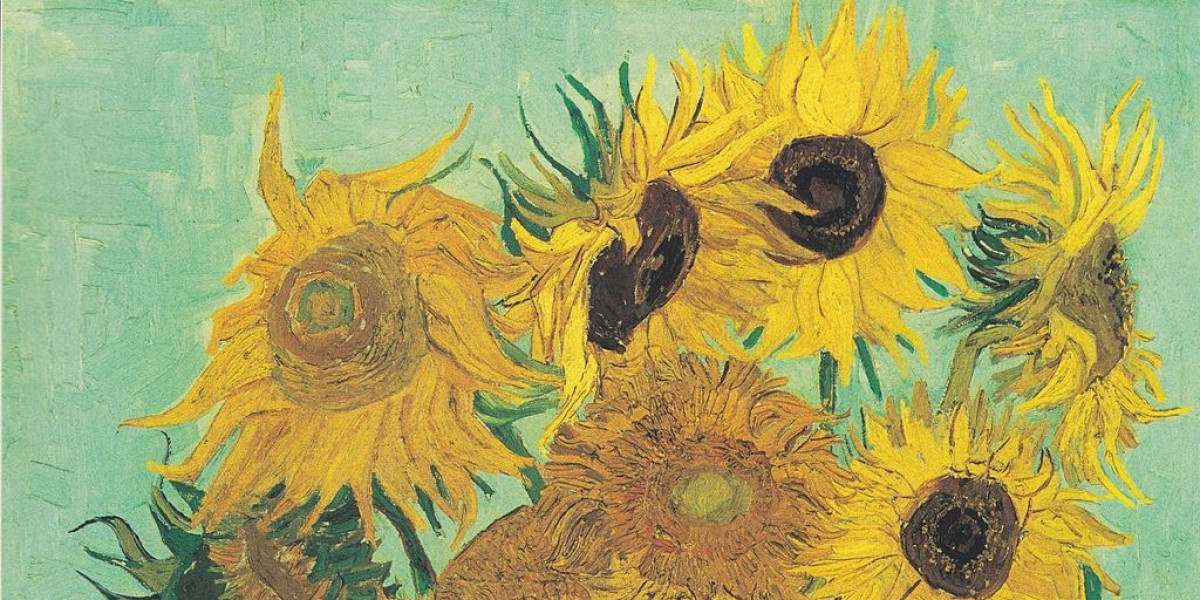 Do you know of anything more recharging than sunlight? The sun filtering through the tree fronts or a sunny morning at the beach can give incredible energy! The perception of the yellow sun rays has a boosting effect that is favorable for the eyes and mind. Yellow is the color of enthusiasm, brightness, and joy. It attracts attention, enlightening good humor, and encouraging better communication. Yellow is the color of mind activation and knowledge. Associated with divine light or the luminous chariot which mythologically carried the sun, it is the pigment of the morning, of the awakening. It bursts forth thunderously after dark: it embodies rebirth, energy, the most productive and golden hours of the morning.

This summer, we want to continue our series of in-depth stories dedicated to colors symbolism in art by focusing on this energizing pigment. We have already dived into the conceptuality of black and white and the intense passion of red, now it is time to recharge our batteries with yellow, in an attempt to capture some of its activating power!

Always commonly associated with light, sun, warmth, and praised for its capability to activate thinking and creativity, the colour yellow also has its shadows and dark sides. This stimulating color symbolism is not common in all cultures. The yellow pigment in art and cultures embodies different meanings and carries the legacy of different sensations and significances.

The word yellow already tells us a lot about its characteristics. it almost certainly derives from the Old English word geolu, which shares the etymological root with the verb ghel,  'to shine'. However, being so bright is not always synonymous with enhancing and positive vibes. From a scientific point of view, yellow is in the middle of the visible spectrum, and it is cognitively the most visible color to the human eye. In the triadic color scheme, it is found paired with red and blue and stands out when matched with its opposite and complementary pigment: violet. Yellow is visibly the most attention-grabbing of all the colors in the color scheme. Its peripheral vision, for example, is 2.5 higher than that of red.

Being a warm color, yellow has been associated with cheerfulness: it is the color of bright ideas that light up and laughing emojis smileys. However, its brightness can also turn into overstimulation. Yellow creates hyper attention, anxiety, it can be disturbing. The importance of the colour yellow can also be seen in traffic signs. Yellow in that case becomes the colour of caution signals, which invite to stay alert and focused, or it is also the colorful sign of the crime scene. It is not a particularly emotional colour. On the contrary, it encourages analysis and staying focused and alert. This feeling of anxiety and hypervigilance is also visible in some yellow paintings and is known by artists who use bright colours with a connotation other than energy.

The color symbolism of yellow has changed over the centuries, and it still changes according to culture and geographical location. The history of yellow is ambiguous and contradictory. Initially used to represent the divine, its light, the hair of Jesus, as if it were a cheaper substitute for precious gold, it began to change in perception as early as the Middle Ages, taking on new negative connotations. For example, during the Medieval French Inquisition, the Cathars, who were considered heretics, were forced to wear yellow crosses for penance. Wearing yellows meant heresy also during the Spanish Inquisition when heretics wore yellow tunics. These historical facts rendered yellow in the common imagination being associated with treason and falsity. In fact, yellow in the artistic iconography was often used for the figure of Judas, the traitor par excellence, or for Mary Magdalene, who was the biblical prostitute before redemption. The yellow color was not a neutral colour in art history, but neither was it in religion and politics. In the terrible Nazi era, European Jews were forced to wear yellow patches depicting the Star of David to make themselves recognizable during persecution.

Even today there are countries where the history of yellow has not only positive connotations. In England, it is associated with fear and jealousy, and it is known as the cowardice color. The origin of this color yellow symbolism is to be found in physiological reactions: it could be linked to the yellow stain that appears on the face in moments of terror! In Germany, it embodies the concept of danger; raising the alert senses, while in Italy yellow has been used since the 1930s to refer to the detective literary genre ('il giallo') and the covers of crime books.

The History of Yellow Pigments

There are many symbolic connotations of yellow, but there are different kinds of yellow pigments in the color palette, too! The history of yellow paint goes back a long way. The first case of yellow art has been realized with ochre. The ochre pigment was taken from earth resources and later used by ancient Egyptians through orpiment to color skin and walls. Medieval artists used a manufactured kind of yellow called Indian Yellow, which was lately the favorite yellow pigment of the painter Turner. The story of how to make yellow color like this is curious but not documented: someone thought it was made through the urine of Indian cows fed only with mango leaves! Later, in the 18th century, it was particularly common a warm yellow inorganic pigment, similar to ochre, called Naples yellow. Yellow color in art was lastly associate with toxic metals, like cadmium yellow, chrome yellow, or lemon yellow. These kinds of pigments were especially popular because used by Impressionists and Post-Impressionists, like Vincent Van Gogh, George Seurat, Monet, and Degas, and they gave a saturated and acidic hue to the color palette. An inorganic yellow pigment with pharmaceutical purposes is also iron oxide yellow.

Many artists have used bright colors and these varieties of yellow to give accents of light in their artworks, but each wanted to communicate something different. The history of color in art and pigments - which we discussed here- is also a history of perception, communication, and a kaleidoscope of emotions. We will explore some blinding examples scrolling through this article.

When Vincent Van Gogh died in the French village of Auvers-sur-Oise, committing suicide by a bullet shot to the stomach, his mental health has severely deteriorated from years of hallucinatory crisis and internments. One of his latest paintings is the spiritual testament of those days: a field of very yellow wheat, in which three dark streets and a flock of black threatening crows loom. Wheatfield with Crows is a yellow artwork, but the color here does not give sensations of light and positivity. It is hallucinated, anxious, somber, like his painter. The wheat moved by the wind is an omen of death; it is the symbolic and chromatic transposition of a troubled, hypervigilant, hallucinated state of mind.

However, yellow is the color that for the whole artistic career has dominated the palette of the Dutch painter, like a recurrent obsession.  Yellow was the house that Vincent shared with Gauguin in Arles, the furniture in his famous bedroom, his well-known fields. Sure, the shimmering light of the South of France and the scorching fields of Provence contributed to the prominent use of this shade, but there's more. Van Gogh mainly used chrome yellow, a highly toxic and poisoning pigment. Furthermore, some studies show how the artist could be affected by xanthopsia, an overriding yellow bias in vision. This yellow-dominated vision is particularly evident in some of Van Gogh's later works. But yellow is also poetically the color of his sunflowers.

These flowers that were placed on his grave by friends, artists, and by his brother Théo because they were "completely Vincent". In Sunflowers, Van Gogh captures the light and the warmth of a landscape and a enlightened way of life that the tormented artist has desperately sought all his life.

Anti-Naturalism and Symbolism: Gauguin, Kahlo, and Dalí Uses of Yellow

Why did Gauguin paint the body of crucified Christ with a bright color like yellow? And why did Salvador Dalí and Frida Kahlo use yellow so often in their surrealist visions? Yellow, as we said earlier, does not go unnoticed: it attracts and disturbs at the same time. Moreover, precisely because of its chemical properties and strident tones, the pigment is often used in an anti-naturalistic and unreal key. Yellow in art gives free rein to the imagination.

When Paul Gauguin painted his Yellow Christ in Pont-Aven, in the folkloristic north of Bretagne, he did not want to paint a realistic scene or a real body. The painting is a crucial stage for the birth of symbolism in the history of art. The Yellow Christ is simple, direct, primitive in lines, and yellow testifies the emotional use of color: it embodies the sensations felt by the painter in the remote place, not the reality of the place itself.

This color yellow symbolism was also used by Frida Kahlo in her painting The Dream (The Bed). In the artwork, the Mexican painter masterfully associated the act of sleep with death in a surrealist but evident way. The blankets of the bed in which she is wrapped are painted yellow: a color that in Mexico symbolizes the earth and maize, but at the same time embodies the cult of death and mourning. Also in Dali's surrealist paintings, such as Eggs on the plate (without the plate), the color yellow is used for its symbolic power. Dalí painted iridescent dawns, Naples-yellow-skies, since yellow is the color "of proteins", of energy, of chemical mixtures.

The Preciousness of Yellow and Gold

We cannot speak of the connotations of yellow without raising the question of gold. Gold, for its luster, durability, and preciousness, has been used abundantly in arts, in particular in the golden icons of the Byzantine era or the Medieval goldsmith tradition. Often associated with divine light and to embellish religious subjects, gold was worked, chiseled, punched, creating shiny and highly refined compositions.

However, the use of gold is not only a sign of ancient times and splendor. Even in the 20th century, artists were fascinated by the most precious shade of yellow. First of all, the king of gilded paintings Gustav Klimt. The Austrian Secessionist painter is one of the most famous creators of gilded artworks, realized through gold leaves. His female portraits are incredibly famous. Gold becomes opulent, decorative, and mystical, even in biblical female figures such as Judith I.

Most of all, yellow is the color of light and sun, and artists have also grasped the energetic potential of this color. Great painters like Turner have represented the iridescence of the sun which illuminates the entire landscape of the marina, reflecting itself in the water of the sea.

But yellow and its brightness have also been captured by contemporary artists that deal with the power of light. Neo-conceptual artist Peter Halley, as well as Dan Flavin in some of his greatest works of neon art (which we discussed here), shaped the architecture through the yellow light. A striking example is the Schirn Rotunda at Schirn Kunsthalle of Frankfurt by Halley. The artist created an atmospheric and immersive installation that runs through the entire architecture of the museum. The work, entirely yellow, is conceived as a bath of iridescent energy. An activating, invigorating space, where yellow works to its full potential: accelerating and explosive.